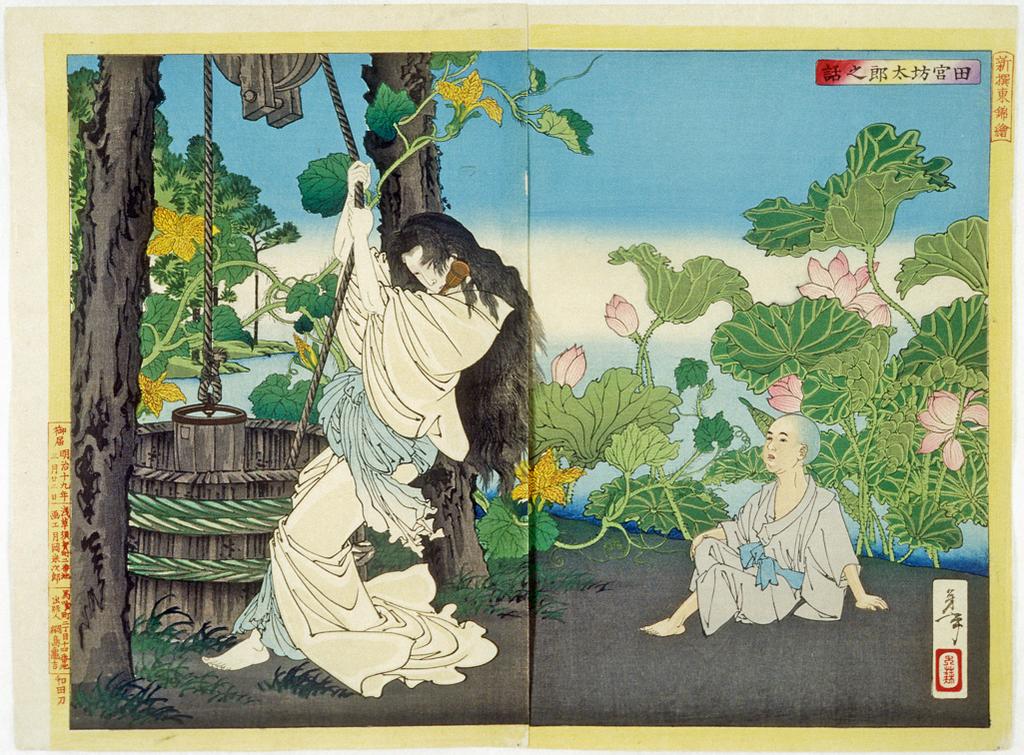 From the series New Selection of Brocade Pictures (Shinsen azuma nishiki-e) published in 1885-9.

This series of 23 prints shows popular scenes from kabuki plays. The term ‘brocade picture’ (nishiki-e) was used to describe multi-colour woodcut prints, and the use of the word ‘Eastern’ refers back to Tokugawa period Edo (the Eastern capital, as opposed to Kyoto). The subjects come from popular folklore and legends that were well-known in Kabuki plays.

After his father Tamiya Genpachirô was killed in 1624 by a rival swordsman, the young Tamiya Bôtarô was brought up in Shidô Temple where he was advised by his uncle to behave as if deaf and dumb in order to throw off his enemies. His nurse Otsuji believed he was really mute and prayed with ritual ablutions to the god Konpira in order that he may regain his speech and become skilled at arms in order to avenge his father’s killer. She is shown drawing a bucket of water from a well to douse herself.

This scene was famous in versions of the Kabuki play Osanogo no adauchi (A Child’s Revenge), and Yoshitoshi’s print was enormously important in influencing how the scene was played. Previously, the water for purging came from a basin rather than a well, but the actor Onoe Baikô (1870-1934), a famous exponent of this role, recalled in his published acting commentary (geidan):

‘I had been planning to alter the acting of the praying scene to use the well-bucket, which was suggested by looking at Yoshitoshi’s multi-colour print (nishiki-e), in which Otsuju was depicted in a very nice pose. My father [Onoe Kikugorô V, a friend of Yoshitoshi] would also have liked to perform it in this way, but he had no chance to do so. I changed the usual way of playing it according to the ukiyo-e print and I adopt exactly the same pose as shown in the print. However, I changed the flower in bloom from lotus to hydrangea. I don’t use real water, being of the opinion that to mimic the effect of water is more restrained, which I think better, although some claim that to use real water is better.’
(Onoe Baikô, Ume no Shitakaze (The Breeze beneath the Plum Blossoms)).

In the play, Otsuji went on to commit suicide as an act of sacrifice, dying in the knowledge that Bôtarô can speak and that his martial skills will enable him to achieve his revenge, even while still a child.