Picture of Masakiyo at Shinshu Castle 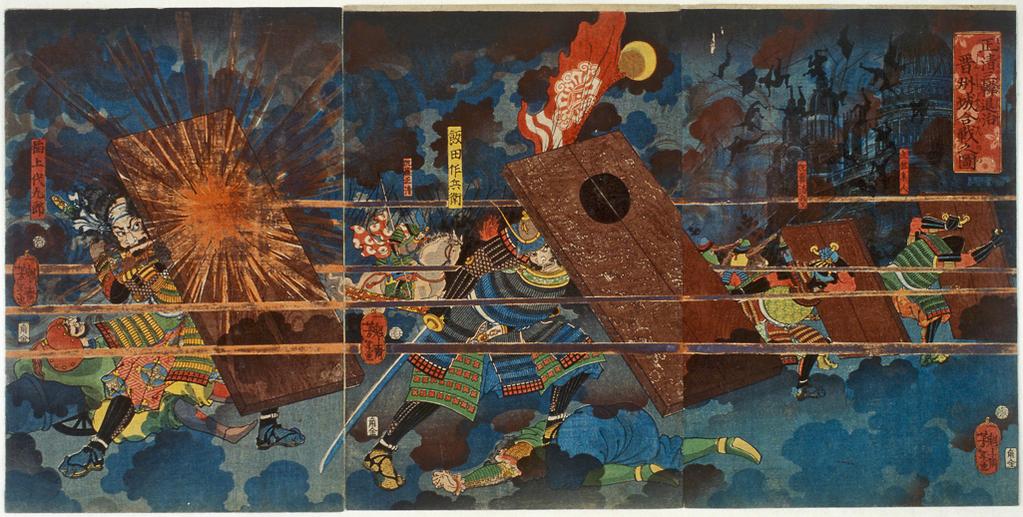 The hero of this print, Masakiyo (Katô Kiyomasa, 1562-1611), commanded an expedition of 200,000 troops in Toyotomi Hideyoshi’s attempt to conquer China by way of Korea in the late sixteenth century. He is shown here leading a charge on horseback, whilst in the foreground two of his leading warriors, Inagami Daikurô and Iida Sakubei, fend off enemy fire with heavy wooden shields.

The treatment of the subject is influenced by the warrior triptychs of Yoshitoshi’s teacher, Kuniyoshi, although Yoshitoshi introduces many imaginative touches of his own. St Paul’s Cathedral makes a surprising appearance in the right background, probably copied from a woodblock print of London by another of Kuniyoshi’s pupils, Yoshitora, published the previous year. This may have been intended to draw parallels between the historical scene and Japanese heroics at the recent battle between Japanese and English warships at Kagoshima in 1862. A popular subject of woodcut prints, Masakiyo continued to be evoked as a symbol of Japanese nationalism in the Meiji period, especially during the Sino-Japanese of 1894-5.