Moon above the Sea at Daimotsu Bay: Benkei 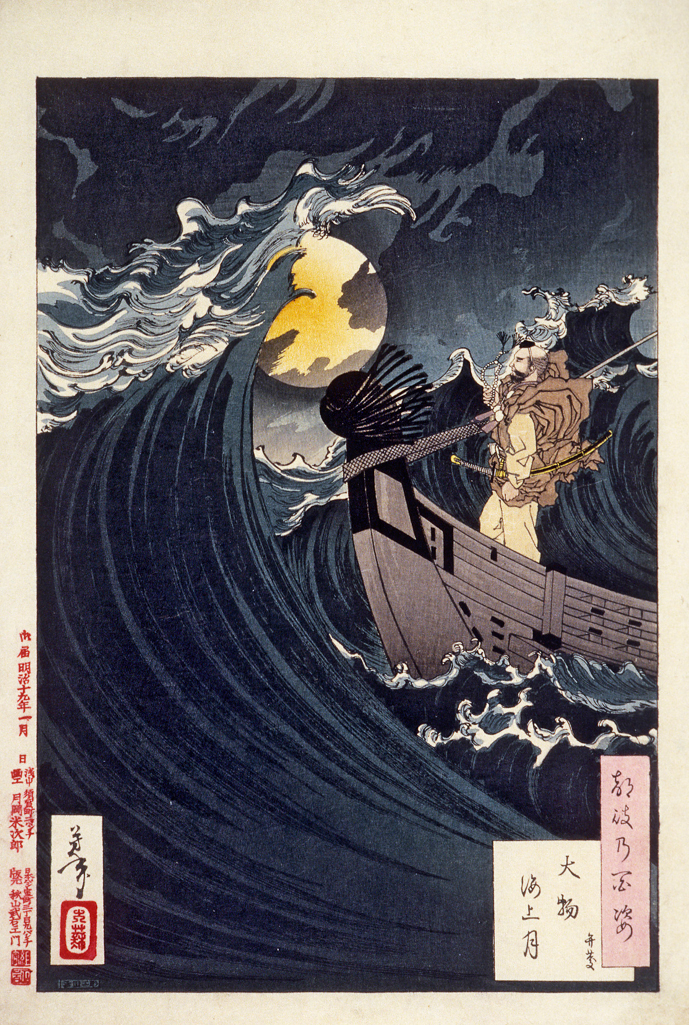 The story of the heroic deeds of Yoshitsune no Minamoto and his loyal servant, the warrior-priest Benkei, was told in the Heike Monogatari (Tale of the Heike) and the Gikeiki (Story of Yoshitsune), and retold many times in plays and prints. This legendary episode was the central subject of famous Noh and Kabuki plays, including the version of Fuwa Benkei (Benkei in the Boat) starring Danjûrô IX premiered in 11/1885. After Yoshitsune’s decisive win over the Taira clan at the battle of Dannoura in 1185, he was outlawed by his brother Yoritomo and forced to flee the capital with his followers. Setting sail, they were caught in an unusually violent storm and heard the spirit voices of the Taira warriors calling for revenge.

A host of dead warriors appeared above the waves and were only quelled when Benkei confronted them, with his rosary in hand, reciting prayers and spells.

Kuniyoshi had depicted this episode in prints with the ghosts clearly visible; Yoshitoshi makes them less tangible, but evokes their presence in the shapes of the black clouds. In fine early impressions such as this example, mica scattered on the surface shines when the print is moved in the light, depicting the moonlight glittering on the dark waves.