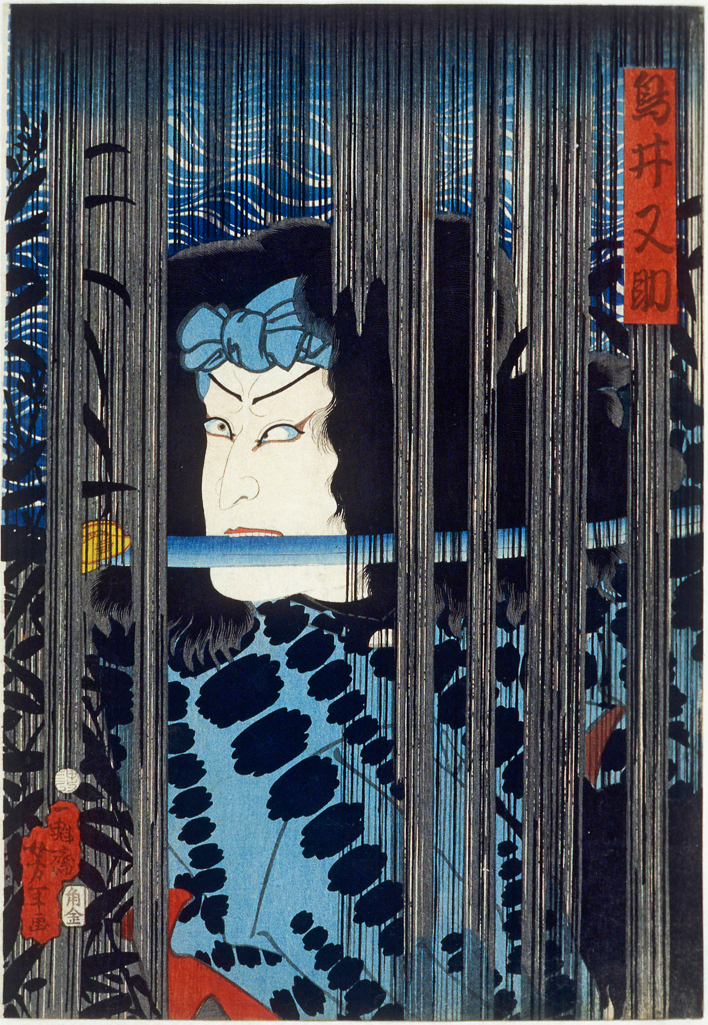 This very early print, made when Yoshitoshi was only 21, shows him trying to make his way in the field of actor prints, then dominated by Utagawa Kunisada (1786-1865). It was published on the occasion of the first performance of Kawatake Mokuami’s play Kagamiyama Gonichi no Iwafuji (On Mirror Mountain: Iwafuji at a later date) at the Ichimura Theatre in Edo in the third month of 1860. This was a sequel to an earlier play, which finished with the death of the evil Lady Iwafuji. In this production, Kodanji established the tradition of playing the roles of both the ghost of Iwafuji and Matasuke, the faithful servant of a samurai.

The drama hinges on the scene shown in this print. Matasuke has been persuaded to murder Oryû, mistress of lord Taga no Tairyô. He attempts to carry out the murder while she is on a ferryboat at Hashiba Ferry, returning from an excursion to view cherry blossoms on the bank of the Sumida River. Unfortunately he kills Tairyô’s wife, Ume no Kata, by mistake, and before realising his error he makes his escape by leaping into the river and swimming for the bank. He is shown in the print emerging on the bank through a bush, with his sword in his mouth; at this moment he drops the scabbard, which later turns out to be a vital piece of evidence associating Matasuke with the crime. He is depicted in this pose in the illustrated programme book (ehon banzuke) to this production.

Ichikawa Kodanji IV (1812-66) was a disciple of the great Ichikawa Danjûrô VII in Osaka and succeeded his teacher as Edo’s leading actor after Danjûrô’s death in 1859. He overcame his slight stature and limited vocal gifts by developing the art of ‘special effects’ (keren), such as flying (chûnori) and quick-change technique (hayagawari), but he also won acclaim for his realism in playing well-intentioned men whose circumstances drove them into crime. His two roles in Kagamiyama allowed him to show off both sides of his art: dancing around in the air as Iwafuji’s ghost, and playing the great dramatic scene in which Matasuke realises he has murdered the wrong person, which leads to his suicide. Kodanji featured in numerous prints by artists of the previous generation, such as Kunisada and Yoshitoshi’s teacher, Kuniyoshi.