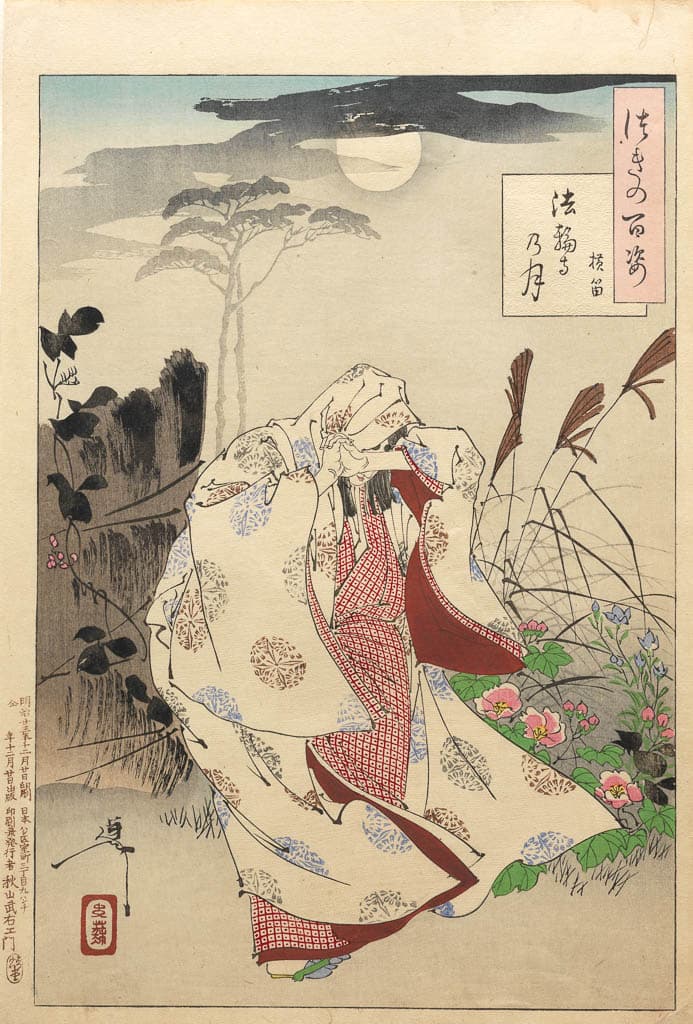 From the series One Hundred Aspects of the Moon (Tsuki hyakkei) published in 1885-92. Yokobue was an attendant of the empress Kenreimonin in the 12th century. A young guard fell in love with her, but when his father objected to the match he left to become a monk at Hôrin temple in the mountains.

Yokobue travelled to see him, but fearing that he might be tempted to forget his vow, he made use of the fact that he had changed his name and sent a message that no one of the name she was calling was at the temple. Heartbroken, Yokobue departed. According to Heike monogatari (Tale of the Heike), she became a nun, but in the sixteenth century Yokobue sôshi (Book of Yokobue) she threw herself into the Ôi River and her lover ran down the mountain to find her drowned.

The print shows her as she turns away to come down from the mountain, with the mood of the landscape reflecting her state of mind: the clouds covering the moon, the wind tugging at her robes, the fence a barrier between her and her lover, and the intertwined pine trees, symbols of conjugal happiness, disappearing in the mist. Her pose is suggestive of the meaning of her name, ‘transverse flute’.

The depiction of the landscape recreates the effect of Rimpa screen painting, with the clouds and fence effectively carved to mimic broken brushstrokes.