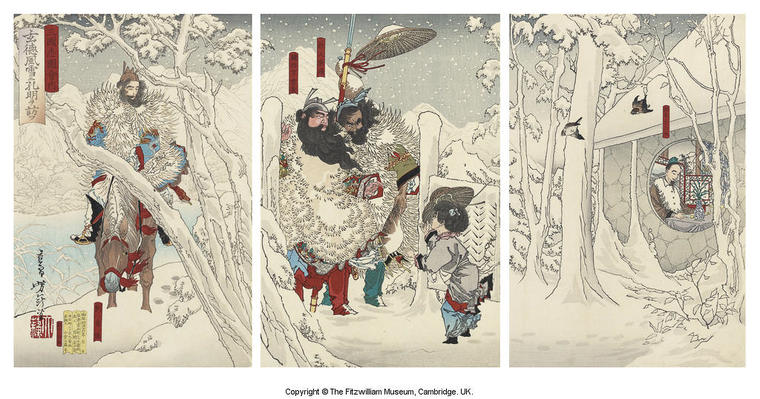 From the series of 2 Illustrations for Romance of the Three Kingdoms (Sangokushi zue no uchi) published in 1883.

The fifteenth century Chinese novel Romance of the Three Kingdoms (Sanguo yanyi) tells of the establishment of the three kingdoms of Shu, Wei and Wu after the fall of the Han dynasty in 220. It was introduced into Japan in the early Edo period and remains popular today. Gentoku is the Japanese name for Liu Bei (221-222), who became Emperor of Shu in 221. According to the novel, in 207/208 Gentoku travelled with his brother-in-arms, Uncho (Guan Yu) and Yokutoku (Shang Fei), to persuade the Taoist scholar Kômei (Zhuge Liang) to become his adviser. Kômei was living as a hermit in a hut in the mountains and was initially reluctant to enter Gentoku’s service, but he was finally moved on Gentoku’s third visit by the sincerity of his tearful plea:

‘If you will not, Master, what will become of the people?’ Kômei is seen on the right, poring over learned texts; his hut seems to be more substantial than the straw hut described in the novel.

This episode was also illustrated in a triptych by Kuniyoshi published in 1853. Gentoku was often depicted in ukiyo-e prints in another episode from Romance of the Three Kingdoms, showing him with Uncho and Yokutoku swearing an oath of brotherhood while drinking wine in a peach orchard. Together they were known as the three heroes of Shu (Shoku sanketsu).