Geisha holding a mirror whilst blackening her teeth 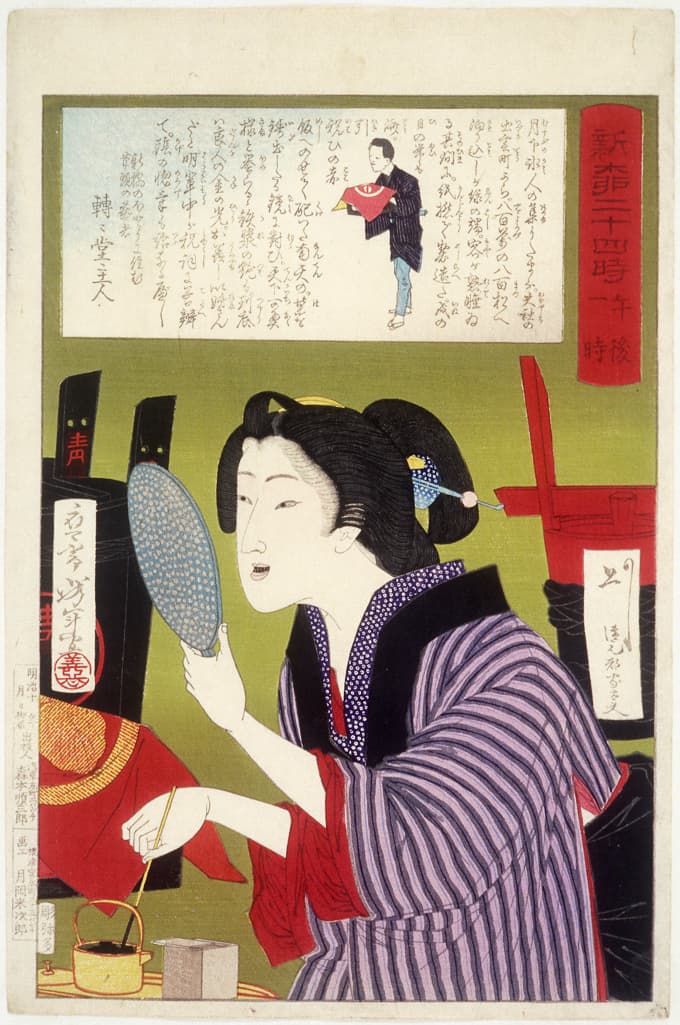 From the series Twenty-four Hours of the Day at Shimbashi and Yanagibashi (Shinryu nijushi toki) published in 1880-1.

This series follows the pattern of previous print series by artists such as Utamaro, depcting bijin (beautiful women) engaged in pursuits at different hours of the day, but the use of the 24-hour clock gave the series a modern ring, as Japan had only recently moved from the Chinese zodiacal system; many other Western innovations are mentioned or depicted on the prints. The text on the prints was provided by the writer-journalist Takabatake Ransen (1838-85).

All the women in the series are geisha (skilled entertainers/performers, not prostitutes), except for the woman in this print who has retired from the profession of geisha to become a wife. We see her blackening her teeth with a dye made from iron filings (ohaguro), an indication of her new status. Blackened teeth were considered attractive (visible teeth were regarded as improper) and were usually the mark of a married woman.

The text includes the lines:

‘In celebration of her retirement, she sends gifts of steamed rice and red beans garnished with nanten leaves. Now she looks in the mirror chased with the nanten design. ‘An enviable Head Geisha’, they all say, ‘the greatest wife under the sun, with her lovely blackened teeth, shining like her husband’s gold.’’ (Translated by Harue Summersgill and Alfred H. Marks with Kodaira Takashi and Ishigami Hidemi)

Yoshitoshi’s preparatory drawing for this print is in the Fitzwilliam Museum’s collection.